See individual episode analyses of The Night Shift below:

No nurses no care? 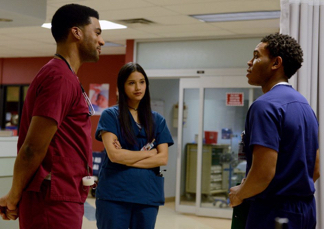 October 2017 – Now that NBC's summer hospital drama The Night Shift has aired its fourth and final season, let's take a look back at the third season, from summer 2016. A descendant of the network's classic ER, the show featured intense trauma scenes at a San Antonio public hospital emergency department (ED), romantic intrigue among the physician characters who dominated, and in Kenny Fournette, an attractive major nurse character who was not an idiot, along with a few minor nurse characters who actually talked. Kenny is strong, athletic, and socially adept. He displays some health knowledge, reporting vitals and performing basic procedures. And as an African-American man, he sends a good message about nursing diversity. But it seems clear that The Night Shift nurses are mostly there to carry out physician commands. In general, the physicians run the ED, perform the complex life-saving procedures, and provide the patient advocacy and support. They also do some physician nursing, handling tasks that nurses are more likely to do in real life. Kenny's care plotlines have tended to be the least emergent ones. And in the third season there was a distinct focus on his enterprises outside of nursing—life coaching, personal training, gym ownership—as if nursing wasn't enough to sustain his professional (or our dramatic) interest. Other nurse characters, particular a senior one named Molly Ramos, did get a few substantive lines, but on most occasions the nurses were merely assistive. A July 2016 episode included a nurses strike, and that plotline made a few good points in passing, including that nurses are often understaffed. However, it was pretty perfunctory, with generic statements from physicians about the nurses' value. The physicians seemed to miss the striking nurses more for their knowledge of where equipment and supplies were, rather than for the nurses' health care skills. Although the plotline managed to avoid directly suggesting the nurses reported to physicians, it was never quite clear who the "management" the nurses were negotiating with was—no nurse manager appeared. Please join us in urging show creators Gabe Sachs and Jeff Judah to highlight the life-saving roles nurses really play in the ED in any future hospital-related programming they may do. more...

Bartender of the emergency department 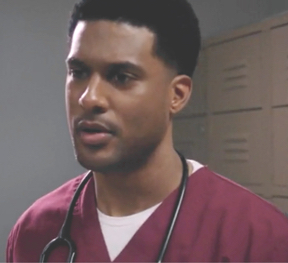 July 2017 – As NBC's summer hospital drama The Night Shift airs its fourth season, it may be instructive to look back at the season that started it all, from summer 2014. That first season revealed the San Antonio-based show to be one of many descendants of the network's classic ER. That means pulse-pounding trauma scenes at a public hospital emergency department (ED), romantic intrigue among the roughly seven physician characters who dominate, and an attractive major nurse character who's not an idiot, along with a few minor nurse characters who actually talk. The major nurse character, Kenny, is a strong African-American man, continuing a recent trend--such characters have appeared on Showtime's Nurse Jackie and short-lived shows like Combat Hospital (ABC/Global) and Miami Medical (CBS). Kenny displays some health knowledge, reports vitals and performs basic procedures. However, he also seems to know and do less than the major nurse characters on ER did. And it seems clear that the Night Shift nurses are there to carry out physician commands, fetch physicians, and convey information to physicians. The actor who plays Kenny, J.R. Lemon, observed in an interview posted on the NBC site in July 2014 that his character is like the "bartender" of the ER, not a physician but a "doctor of the heart," deploying his interpersonal skills to help patients; Lemon also suggested that nurses run the ED, presumably in a logistical sense. But on the actual show, the physicians run the ED in every important way. In addition, consistent with Lemon's implication that his character does not have the kind of technical knowledge physicians do, Kenny never takes the lead on a clinical case. The physicians perform the complex life-saving procedures. In fact, true to the standard Hollywood model, these nurses rarely speak to patients. Kenny's personal skills are usually directed at the physicians, as he encourages the junior physicians, banters with more senior physicians, and helps the hospital administrator improve his online dating profile. Meanwhile, it is the physicians who educate, advocate for, and comfort patients. Please join us in urging show creators Gabe Sachs and Jeff Judah to highlight the life-saving roles nurses really play in the ED. more...

The Night Shift aired 4 seasons from May 2014 to August 2017. It is no longer in production. See more details on epguides.com.

And please copy us on your letters at letters@truthaboutnursing.org.

Thank you for speaking out and advocating for nursing!