Fall 2016 overview of nursing on television

Let Sandy help your nurses and students fully embrace their autonomy to better protect patients! Sandy just got back from speaking in Washington DC, Houston, New York, Iowa, and Vancouver, and gave the graduation speech at Johns Hopkins University School of Nursing. She speaks widely to a variety of international nursing groups. Click here to see details and book her today!

Nursing Professors: Get a video-chat guest lecture from Sandy Summers for just $100 for a limited time

Nursing professors who require their students to read Saving Lives: Why the Media's Portrayal of Nursing Puts Us All at Risk can Facetime their class with co-author Sandy Summers for just a $100 donation to the Truth

Fall 2016 overview of nursing on television

October 2016 -- The new U.S. prime time season includes many health-related shows, but as in recent years, most are physician-centric. It appears that the only major new hospital show in the traditional fall season is CBS's Pure Genius (premiering Oct. 27). Here, the usual hotshot physician crew is assembled by a tech billionaire who provides free cutting-edge care to those with rare diseases; naturally, his team is headed by a surgeon! Looks like about five physicians and no nurses. Among returning shows, a few do feature nurse major characters, although most of those are not mainly about health care. An exception is the BBC's powerful Call the Midwife, which will be back in early 2017 for its sixth season, with London nurse-midwives providing expert, autonomous community health care in the early 1960s. PBS's Mercy Street (Jan. 22, 2017), about a hospital treating soldiers during the U.S. Civil War, will return for a second season with nurse central character Mary Phinney, who displays some strong patient advocacy, if not much substantive knowledge. Outlander (Starz) will return in 2017 for a third season of adventures by the intrepid and skilled time-traveling nurse Claire Randall among the rebels of 18th-century Scotland, although Claire (at least in her 20th Century incarnation) has now become a physician. See a trend? Nurse-focused shows must be set in the distant past, when strong women could be nurses instead of physicians! A few crime shows feature nurses. The expanding Netflix stable of Marvel Universe shows includes nurse-to-the-superheroes Claire Temple, now appearing in Luke Cage (Sept. 30)--not a lot of health care, but Claire is skilled, tough, and savvy. And when the BBC's Sherlock returns with a fourth season in January 2017, so will Mary Morstan--the formidable assassin / nurse married to John Watson. But among present-day health-focused programming, physician-focused shows still predominate, including four returning for second seasons. The first, CBS's Code Black (Sept. 28) is about a busy Los Angeles emergency department (ED). The show has one senior nurse character--basically a savvy aide-de-camp to the physicians--and about eight major physician characters. Chicago Med (Sept. 22) also portrays a busy urban ED and is dominated by 6-8 expert physicians, although it has two competent assistive nurse characters, plus an executive who no longer practices as a nurse but has overall responsibility for the trauma center. Fox's Rosewood (Sept. 22) follows a charismatic Miami "private pathologist" who teams with a police detective to solve crimes; no nurses. And ABC's sitcom Dr. Ken (Sept. 23), also back for a second season, features a cranky HMO physician with a faithful nurse named Clark--really more of a lap dog, Clark displays little expertise or authority. Among older shows, there will be more of ABC's Grey's Anatomy (Sept. 22) (sexy, brilliant surgeons; handmaiden nurses) and the Hulu sitcom The Mindy Project (Oct. 4) (quirky but skilled OB-GYN physicians; stooge nurses). NBC's summer show The Night Shift seems likely to return in 2017 with about seven heroic ED physicians assisted by a few competent nurses who actually talk, including the macho regular character Kenny. Please join us in encouraging better portrayals of modern nursing! ...more...

September 14, 2016 -- Today soccer star Abby Wambach appeared on National Public Radio's Fresh Air to promote her new memoir Forward. In discussing Title IX, Wambach asserted that the historic legislation was not intended mainly to strengthen women's sports, but instead "there was a ton of women who wanted to become doctors, they didn't want to just be a nurse." Of course, Wambach was characterizing the social attitudes that led to that 1972 statute, not necessarily expressing her personal views of the two health professions. But neither she nor Fresh Air host Terry Gross said anything to suggest that they disagreed with the assumptions underlying Wambach's description: that medicine is a much more important, substantial profession than nursing, and so any ambitious modern female would naturally choose to be a physician rather than a nurse. Even if this was in fact the way Title IX supporters thought, presenting such views with no apparent distance tends to reinforce them because they are still so commonly held, as a glance at Grey's Anatomy episodes of the last decade would confirm. By contrast, Wambach does not describe ignorant views of gender equality with no indication of whether she agrees--instead, she expresses strong disagreement. We realize that feminists tend to assume that jobs to which women were traditionally confined must be less valuable and desirable than the ones dominated by men, and nowhere is this more striking than with nursing and medicine...read more and listen to the audio clip... or go straight to signing our petition! Thank you!

September 25, 2014 -- In recent months, reports on National Public Radio's Morning Edition have highlighted the important roles that nurses can play in improving hospital care through new clinical initiatives. On January 27, 2014, the radio network aired Richard Knox's piece on the efforts of Boston Medical Center to combat "alarm fatigue." That is the well-documented threat to patient safety that occurs when hospital staff confronted with a cacophony of health monitoring alarms have trouble distinguishing those that matter most. The report mainly quoted nurses, including a nurse manager, as well as highlighting the fact that the hospital's successful effort to address the problem had been detailed in the Journal of Cardiovascular Nursing. And today, NPR aired a piece by Sarah McCammon about the recent efforts of nurse "care coordinators" at the Savannah, Georgia health system Memorial Health to reduce costly hospital re-admissions by working closely with patients--talking to them--to manage chronic conditions like diabetes and heart disease. This report relied mainly on quotes from one of the care coordinators, who described his work in helping patients make lifestyle changes and navigate the health care system in some detail. The piece also included success stories. It did seem to reflect some surprise that these nurses were not providing fairly routine bedside care. And it quoted the health system CEO on the program's goals. So some might assume that the nurses' care was being directed by others, when it is actually well within nurses' own holistic practice model. Still, both pieces offer portraits of skilled nurses improving hospital care, and we thank those responsible. ...more...

Patients deserve better protection. Let Sandy help your nurses and students fully embrace their autonomy to strengthen nursing care, reduce errors and improve care! Sandy just got back from speaking in Washington DC, Houston, New York, Iowa, and Vancouver, and gave the graduation speech at Johns Hopkins University School of Nursing. She speaks widely to a variety of international nursing groups. Click here to see details and book her today!

For a limited time, if you teach at a school of nursing and assign the purchase of Saving Lives: Why the Media's Portrayal of Nursing Puts Us All at Risk by each student for required reading for your class, Sandy Summers would be happy do an online presentation / seminar / engagement with your students for only a $100 donation to the Truth About Nursing. Please conact Sandy at ssummers@tansandbox.org to discuss. Thank you! Learn more about our curriculum ideas for professors here. 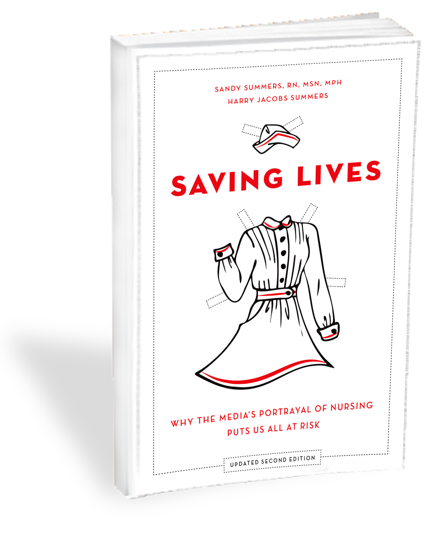